Defeat is not the worst of failures. Not to have tried is the true failure.

Aug 2, 2015 was my 2nd attempt in 70.3 Cobra  Ironman Philippines; a month prior to the event, I have doubts about my capability, I have full on anxiety and fear that I might not even make it to the swim leg; after so much contemplation, I have reached to the conclusion that I could only finish the race if I have decided I can. I respect the distance. I am not that strong in any of the segments of the race, yet I trust myself enough that I can do it. I was full of optimism, but not overconfident, the moment we were released to swim, I remained calm because my training manifested that I can do it in 50min. I stayed away from the buoy because my experience told me that it’s not wise to battle against people who rely too much at it. A couple of unidentified sea creatures hit me, but I didn’t mind it, because I know it’s nothing compared to what I should face. At 1.4km, I noticed, my watch stopped counting the distance yet the time is moving; 50 min. It’s ok… 60… 70… Oh no, what’s going on? Was my watch not working or I was just too slow.  I got alarmed too by the number of people getting close to me. I was really naive and clueless of the scenario; 80 minutes, the crowd just went bigger and bigger, there were people who stopped in front of us, others were trying to swim hitting anything their arm could touch, one was pulling my leg, then another hitting me on the face that had my goggles disarranged; at that time, I decided to stop and look around, I was swimming on the opposite direction and yet I saw people swimming with me. A number of people were heading towards the land so I followed. I was full of disappointments as I get close to the shore because I thought they are just trying to sheep people until I heard someone said, “Last three minutes!” 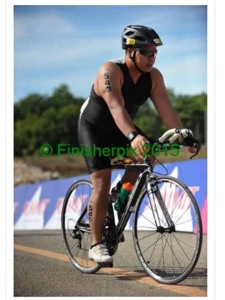 I rushed as much as I could, I still have a chance!

I clocked 85 minutes on my swim; worst ever. I calculated the lost time and it was about 40 minutes that I could’ve spent for the bike.  I knew I was in a difficult situation but of course, I should give it a shot. I was doing well, but I was a bit ashamed of myself for not enduring the scorching heat of Cebu. I struggled. My pace declined every time I was biking against the wind and too relaxed when it was pushing me. I had cramps, I stopped frequently (oh totally unacceptable). After biking the 90km distance for 4 hours and 30 minutes, I reached the transition, shamefully asking the organizers, “I didn’t make it right?” It was another failed race for me; painful because it was my 2nd attempt. I started evaluating myself, apart from the terrible swim course (I’ve heard that full moon affected the movement of the tide hence the current); I looked on what I could’ve done wrong. They said that a bad workman blames his tools and yes, I have too, one of the things I noticed and I thought significant were my bike cleats, that easily unlocks when I pull; hence, during the whole bike course, I was just pushing the pedals. That leads to my negligence in checking little things that counts; Improper placing of the power gels; as it fell; not to mention my unqualified bike training. I do indoor spinning, jogs frequently, constantly hikes, swims, but my training is not at all considered a concrete plan to finish. On a lighter note, I don’t want to be remorseful about this event (hey, I didn’t lose my job yet, not yet); in fact, it was quite a learning experience for me. It was my first time to really fight against a number of people while swimming.  I tend to give way every time I got bullied but this time was different as I thought of survival and at least finish with pride despite of the mishaps.  As many people say: winner takes all, but for me, sometime you win, sometimes you learn. My body may have failed me, and broke my heart, but there will always be time to heal (#inspiringmusicon).

Oh, well, until my next Ironman event. Yes, we will not give up!

Argonaut is a Chemical Engineer turned self-proclaimed multi-sport athlete, an amateur photographer and a certified lakwatsero.

And sometimes... Out of this world!

Blast from the Past